Regardless of what you think about George Soros’ politics, you have to appreciate his genius when it comes to placing market bets and winning.  As an investor, his track record is stunning.   When his starting capital is taken into account, he could easily be considered the greatest investor ever (Sorry Ray!).  When asked about his ability to see the markets more clearly than others, he is incredibly open about what gives him his edge.  He has written economic journal articles and editorials for the  Financial Times (this is a more accessible piece and is where the quotes you see below come from).  In all of these writings, he states his study and application of human Fallibility and Reflexivity are the source of his keen foresight. 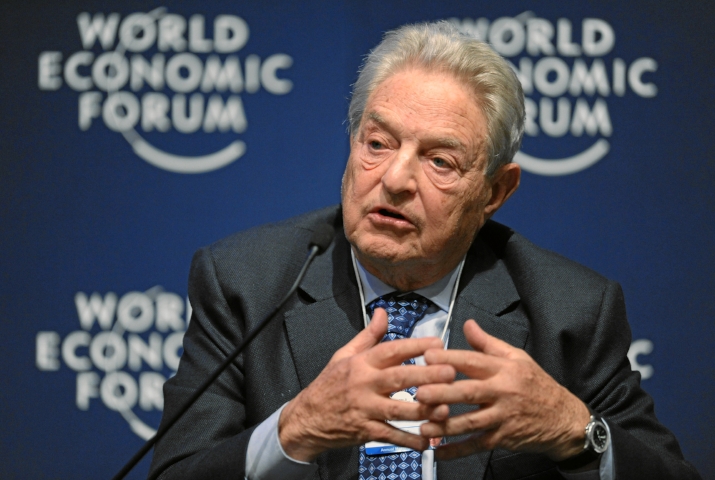 Fallibility and Reflexivity, an Overview

Fallibility, most simply put, is the concept that humans make decisions on imperfect information.  This is what separates the real world from the models most economists use, and it is due to these false beliefs and the decisions that flow from them that cause these models to break down.  As Soros states:

It is generally recognized that the complexity of the world in which we live exceeds our capacity to comprehend it. I have no great new insights to offer. The main source of difficulties is that participants are part of the situation they have to deal with. Confronted by a reality of extreme complexity we are obliged to resort to various methods of simplification—generalizations, dichotomies, metaphors, decision-rules, moral precepts, to mention just a few. These mental constructs take on an existence of their own, further complicating the situation."

The power of these mental constructs, and the connotations and presuppositions they carry with them, cannot be understated. This is especially true with regards to things as ethereal as cryptocurrencies.  How does one conceive them in ones mind?  How do we make sense of them?  Mostly by relating them to things we have seen and used before, but because they are by nature entirely different from almost anything that has come before, we introduce error and imperfection even in our mental construct.  We introduce even more error when we try to explain how these systems work to other less experienced people and they cycle continues.  How many times have you heard tired analogies, “Bitcoin is like gold” “Cryptocurrencies are like _____ (you fill in the blank here)”.  To make matters worse, reputable and knowledgeable voices in the space are nearly non-existent and scammers abound.  People must wade through thousands of misinformants pumping the coin of the day to find any real information.  Again, from Soros:

The brain is bombarded by millions of sensory impulses but consciousness can process only seven or eight subjects concurrently. The impulses need to be condensed, ordered and interpreted under immense time pressure, and mistakes and distortions can’t be avoided. Brain science adds many new details to my original contention that our understanding of the world in which we live is inherently imperfect.”

How can one sus out truth in such a sea of imperfection?  Hence the concept of Fallibility.  Like Mr. Soros said, this is not a “great new insight” but keeping the fact in your mind and seeing that it is affecting the decisions of others will help you find the truth and evaluate market movements.

This leads to the next, more nuanced theory: Reflexivity.  At its most basic level, Reflexivity states that our perceptions and actions are influenced by the actions of others.  Here’s more from the master:

So through our views of the world around us, we form our beliefs.  These beliefs almost certainly do not represent a perfect reflection of the world around us.  This is the concept of Fallibility.  Then, upon these beliefs we create plans and carry out actions.  These actions impart change on the market.  Other participants are viewing these market changes and through them are having their beliefs impacted.  Their changed beliefs result in changed actions, and so on and so on. 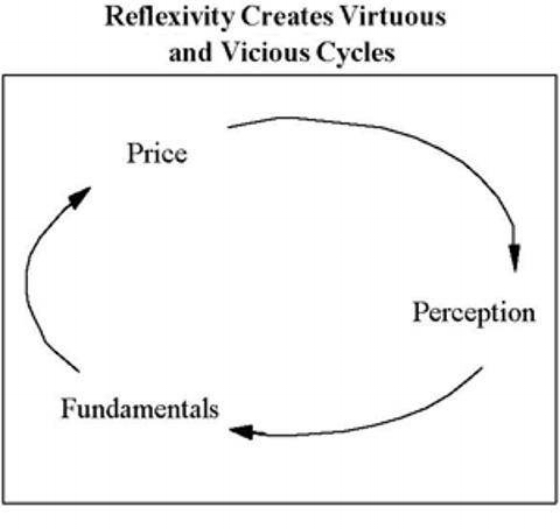 Fallibility and Reflexivity in the Crypto Markets

Now let’s look at how these ideas play out in the crypto markets.  I could use any number of current examples here but triggering readers by slaughtering their favorite sacred crypto cow is not the purpose of this article.  The purpose is learning, so we will use the already rotting carcass that is…. 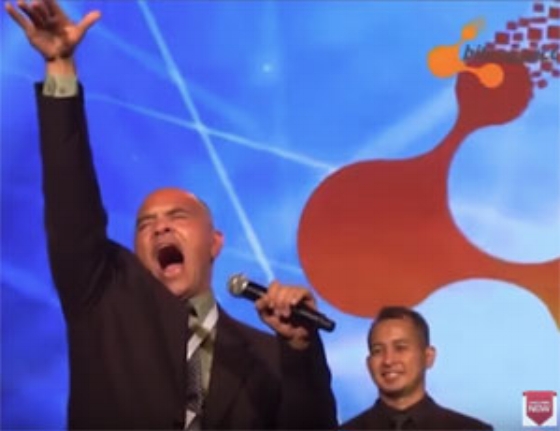 Let’s begin this example by assuming the role of a cryptonoob.  The time period is early 2017, and he doesn’t know much, if anything, about how cryptocurrencies work, but is excited about the new technology and, like almost all people, wants to make profitable investments to have a better future.   The newbie goes onto google and through his search, makes his way to coinmarketcap.com.  Amongst a sea of red, he finds a bit of green next to the BCC coin.  In fact, it was up 50% in just the last day! This peaks his curiosity.  Obviously, this coin must be something special, even when the entire crypto market is down, Bitconnect smoothly sails through the storm.  A quick search further shows just how many others are getting rich with Bitconnect. 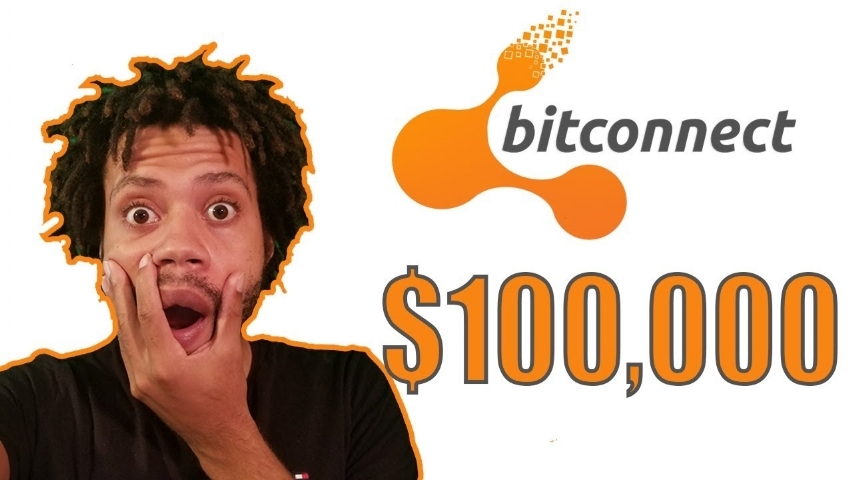 Trevon James hits $100K in loans. What’s your goal with Bitconnect? (Thanks to our friends at Bitconnect.Me for the image /s)

So we can see the impressionable newcomer get swallowed up by a sea of misinformation.  This is Fallibility in motion.  The newcomer then breaks out his wallet and buys the token.  His actions, in concert with others in the market, push up the price.  This influences the next newcomer who puts his money in, further pushing up the price and, perhaps just as importantly, bolsters the beliefs of all those that came before that this really is a solid investment.  This cycle will continue to reinforce itself until the something comes to break it’s momentum.  In Bitconnect’s case, it was regulatory action, but it could have just as easily been missed interest payment’s due to the Ponzi running out of cash.  Either way, it was going to fall apart at some point.

It is important to note that Reflexivity does not have to result in a vicious cycle, as we explored above.  It can also result in virtuous cycles, where a surging price can bring about a shift in perception, which ushers in new investment in infrastructure.  This new infrastructure results in improved fundaments, which support an increasing price.   I submit that this has been happening in Bitcoin since it’s very early days.  As its price has increased, more people have been drawn to contribute to the project, resulting in improvements and increased use cases.  This infrastructure and utility value has resulted in an increased price which gains more notoriety for the project which influences new investors to build better infrastructure.  The virtuous cycle continues unabated, as it has for the last 8 year, despite numerous pundits calling for its demise all along the way.

While they are not always the dominate forces at work, virtuous and vicious cycles do affect all markets.  Additionally, if you are looking at any market, but especially the crypto markets, without knowledge of the concepts of Fallibility and Reflexivity, as popularized by Soros, then you are showing up with a knife to a gunfight.

In part two, I will take a closer look at one of the more interesting aspects of Reflexivity, the idea of a malleable future, see how it how Soros has used it in the past, and see how it can the crypto landscape going forward.

Thank you for making it to the end of the article. Please let us know what you thought and use code HODL-WITH-FODL5 for $5 off your order, valid this week only! You can shop for billfodl's here.